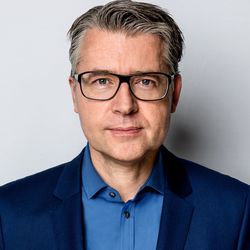 Matthias Schrader is CEO of SinnerSchrader and Managing Director of Accenture Interactive ASG. Since the early 80′s he has specialised in the world of technology and Internet. During this time, the IT industry has experienced much change and development, which Matthias excitingly witnessed and experienced himself. Together with more than 600 consultants, designers and software developers, Matthias Schrader mainly supports DAX companies in the development of digital products at SinnerSchrader. In 2006 Matthias founded the NEXT Conference which, within a few years, established itself as a leading conference for digital transformation in Germany. In February 2017, the worldwide management and technology consulting company Accenture announced that it would acquire SinnerSchrader for a three-digit million sum.