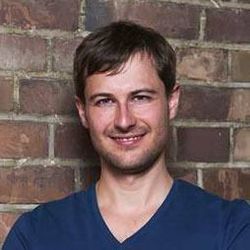 Pan Katsukis is a Berlin-based serial entrepreneur serving as CEO and Co-Founder of Remerge, a leading app retargeting provider.
After working together at mobile advertising companies madvertise and LiquidM, Pan and his 4 friends and co-founders formed Remerge and set about building the most efficient and scalable app retargeting solution on the market. Using sophisticated technology, the platform streamlines complex and manual processes to help app developers dynamically segment their user base and re-engage them with relevant and personalized marketing campaigns. With backing from top advisors and investment from Point Nine Capital, Pan and his team of ad tech veterans and internet entrepreneurs have attracted top grossing app developers including the likes of Spotify, CBS and Foodpanda.
Before founding Remerge, Pan was involved in the emerging Berlin startup scene back in 2008. While Co-Founder and Chief Product Officer at madvertise he built the mobile advertising industry's biggest programmatic buying platform. He proceeded to develop the company into the largest independent mobile ad network in its home market, Germany, before rolling out the business in a number of other countries and growing the team to 100 people. Pan's expertise lies in the display advertising market, in particular, the field of mobile advertising and programmatic buying, and he is well experienced in building technologies, working closely with developers and fostering company culture during periods of rapid growth. With an avid interest in the industry and an entrepreneurial spirit, Pan strives to revolutionize the mobile advertising space.