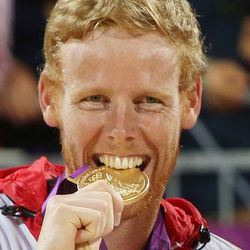 Jonas Reckermann is, together with Julius Brink, Germany’s most successful Beach Volleyball player. 10 million viewers watched on TV as the four-times European and World champion won gold with his partner, Julius Brink, on the Horse Guards Parade at the London Olympics. The sports career of the Munster land born, but now at home in the Rhineland, Julius Reckermann, began with football and athletics. Concurrent to his sporting career he studied in Cologne to become a teacher (geography and sport) and is qualified to teach upper sixth pupils. Alongside his appearances as a speaker, the Bambi and Werte prize-winner is busy as Brand Messenger, commentator and Beach Volleyball expert. At the Olympic Games in Rio he was active as expert for the ZDF. Together with his erstwhile Beach Partner he also visited top German athletes on their way to Rio as part of the “Gold Meets Gold Hopes” project.