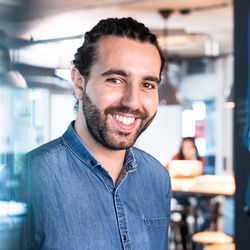 Tarek Müller (29) is one of the co-founders and managing directors of ABOUT YOU, which is among the fastest-expanding e-commerce start-ups in Europe and Hamburg’s first unicorn with a value of more than USD 1 billion. Müller has been developing digital business models for online retail for over ten years and is responsible for marketing and brands at ABOUT YOU.

The entrepreneur founded his first online shop at the age of 13. He subsequently built up countless e-commerce models in various industries as a managing partner. Starting in 2007, he also established service companies to support clients with the development and execution of new business models. His agency NetImpact Framework GmbH evolved into one of Germany’s largest digital agencies with more than 70 employees and clients including the Otto Group. In June 2013, the Otto Group took over the business along with its entire workforce, acquiring the agency Creative-Task at the same time for the core team of the Collins e-commerce project, which gave rise to ABOUT YOU. With its consistent focus on personalisation, inspiration and mobile shopping, ABOUT YOU generated a revenue of €283 million in 2017/18. It is now one of the largest fashion e-tailers in Germany. Born in Hamburg, Tarek Müller is also founder and partner in eTribes Framework GmbH, which was established in 2011. He is active as an investor and a business angel as well. All in all, he holds stakes in more than 15 companies. In 2010, he established the code.talks developers’ conference in Hamburg together with Sebastian Betz. This attracted approximately 1,800 attendees and 120 national and international speakers in 2016. It is considered the largest conference for developers in Europe. Müller won the ‘e-Star Personality Award’ in 2014; the business magazine Capital ranked him among their ‘Junge Elite – Top 40 unter 40’ (‘Young Elite – Top 40 Under 40’) in both 2015 and 2016; and the US magazine Forbes featured him as one of the brightest European entrepreneurs in the 2018 edition of ‘30 under 30’.