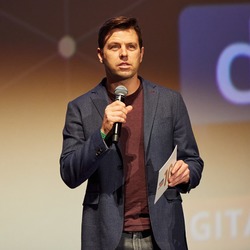 Today Justin is a Director of Mediatel Events, working around the world to provide high-level networking and information sharing across the broadcast, media, digital and advertising industries. He can be found spearheading sell-out conferences in Sydney, London and Toronto and hosting private, invite-only gatherings under the Pathfinders brand. All these events are characterised by a razor-sharp focus on the opportunities and challenges that stem from industry disruption.

Justin is an accomplished Chair and host who also enjoys traveling to other industry events to oversee sessions, panels and custom private forums. Raised in Suffolk, England, Justin is naturally a Manchester United fan, a rubbish musician and has an unhealthy interest in hop-hop and 90s rock.