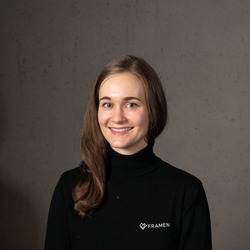 Magdalena Pusch is Co-Founder and CMO of the media tech startup FRAMEN, which was recently invested in by Europe's media group Axel Springer as well as international investors such as Softbank. She founded her first startup in Silicon Valley, and then worked at Google for several years. Magdalena is up until now the youngest board member of the German Marketing Association (DMV) and was honored with the "Better Future: Female Founders" award in 2020. She mentors young founders and supports entrepreneurship at schools and universities.